Thunderbolt is an I/O technology that can be used to connect external peripherals to a computer — similar to USB and FireWire. It works by bridging PCIe between the controllers on each end of the connection, which in turn means that devices connected via Thunderbolt are ultimately connected via PCIe. Therefore thunderbolt can achieve very high connection speeds, fast enough to even drive external graphics cards. The downside is that it also makes certain attacks possible (e.g. Thunderstrike, DMA attack).
To mitigate these security problems, the latest version — known as Thunderbolt 3 — supports different security levels:

The active security level can normally be selected prior boot via a BIOS option, but it is interesting to note that in the future the none option is likely to go away. This of course means connected thunderbolt devices wont work at all unless they are authorized by the user from with the running operating system.

Intel has added support for the different security levels to the kernel and starting with Linux 4.13. The interface to interact with the devices is via files in sysfs. Since July we have been working on the userspace bits to make Thunderbolt 3 support "just work" 😉. The UX design design was drafted by Jimmac. The solution that we came up with to implement it consists of two parts: a generic system daemon and for GNOME a (new) component in gnome-shell. The latter will use the daemon to automatically authorize new devices. This will happen if and only if the currently active user is an administrator and the session is not locked.

Today I released the first version 0.1 (aka "Accidentally Working") of bolt, a system daemon that manages Thunderbolt 3 devices. It provides a D-Bus API to list devices, enroll them (authorize and store them in the local database) and forget them again (remove previously enrolled devices). It also emits signals if new devices are connected (or removed). During enrollment devices can be set to be automatically authorized as soon as they are connected. A command line tool, called boltctl, can be used to control the daemon and perform all the above mentioned tasks (see the man page of boltctl(1) for details).

I hope that other desktop environments will also find that daemon useful and use it. As this is not a stable release yet, we still have room for API changes, so feedback is welcome. 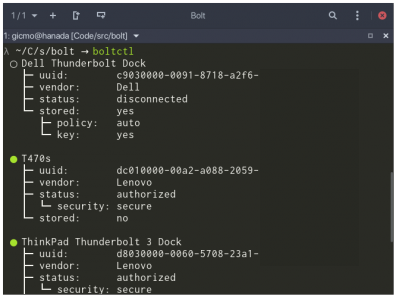 New software needs testers, so everybody who has a computer with Thunderbolt 3 and feels courageous enough is welcome to give it a try. I created a copr with builds for Fedora 27 & rawhide and Jaroslav created a PKGBUILD file so Arch users can find it already in the AUR. As this is very fresh software it will contain bugs and those can be filed at the issue tracker of the github repo.

I am locally running a Proof-of-Concept gnome-shell extension that implements the user session bits to complete the aforementioned : It uses bolt's D-Bus interface and listens for new Thunderbolt devices and then enrolls them, if the user is logged in. Since it can take a while until all the devices that are attached via thunderbolt are properly connected the daemon has a Probing property that is used to display a little icon as a way to inform the user that something is happening on the thunderbolt bus. All of this is already working quite well here on my test machine. In the next few days (weeks?) I will be working on integrating that code into gnome-shell. There are a few open UX questions that need to be addressed, but all in all things looking good.