TL;DR: Not every USB-C port is a Thunderbolt 3 port. Watch out for the logos!

One thing that I have learned in conversations about Thunderbolt is that it is important to distinguish between Thunderbolt the I/O technology and the physical connector that is used by it, because this seems to be a constant source of confusion. Over the course of its history, Thunderbolt used different types of connectors; Version 1 and 2 used Mini DisplayPort. USB as the older and more ubiquitous I/O tech also uses a myriad of different connectors ([{mini, micro}-]{A, B, AB}, SuperSpeed, ...). 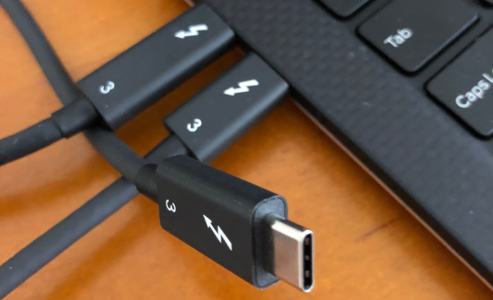 USB-C connector on a Thunderbolt 3 cable. NB: The flash logo

In order to simplify this and make things generally better, a new universal connector was designed: the USB Type-C connector. A universal connector for a universal bus, ha! But besides USB, this connector is also used by Thunderbolt 3. It has some nice properties (it is symmetrical!) and is quite versatile, i.e. it can be used to deliver power via USB-PD to peripherals.
On the technical side, this can be done because USB-C supports different Alternate Modes: e.g. DisplayPort, HDMI and Thunderbolt 3, which itself then can also carry DisplayPort. Now the important bit: all of the alternate modes (and USB-PD) are optional. It depends on what kind of controller the USB type C port is connected to. Ergo it is not clear what data can be transported by just looking at the port alone: maybe DisplayPort or it might even support Thunderbolt 3. The crucial bit of information is conveyed via the little logo that is printed next to the port. Since physically different pins are used for different modes, the logos are also important on the USB-C cables. Logo usage is regulated by the USB logo usage guidelines.

What this all boils down to is the tl;dr from the top of the article: not every USB-C port is also a Thunderbolt 3 port. If you want to connect a TB3 device to a computer, make sure all involved ports (and cables) have the right logo:

Some people who own a T480s learned this the hard way when they were wondering why Thunderbolt was not working for them when plugging things into the leftmost USB-C port. I had a few reports of bolt not working, followed by noticeable embarrassment, although it is arguably the design of the port itself which is at fault. 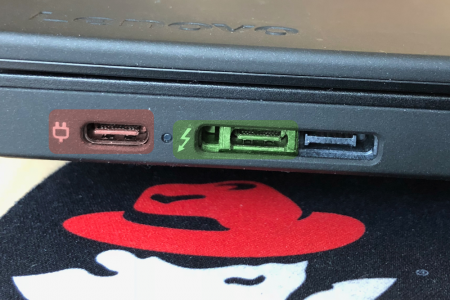 NB: Since there are also different types of Thunderbolt 3 cables (active, passive), you might get different maximum speeds (20Gbit/s vs 40Gbit/s) depending on the cable you use. For the few different cables that I have seen so far, they could not be distinguished based on their appearance alone.

In related news: bolt 0.5 is out (since about a month now) and will be shipped with Fedora 29. Have a look at the release notes for a complete list of changes, but the most important one I want to highlight here is the new force power D-Bus API. What is it and why do we need it? The Thunderbolt controller can be in two different modes: one in which it is constantly powered (native enumeration mode) and one in which it is controlled by the BIOS. In the latter mode, if nothing is plugged into the Thunderbolt port the controller is completely powered down and it looks as if there is no Thunderbolt hardware present at all. This is great because it saves battery, but there are two problems: 1) boltd wants to know what security level the Thunderbolt controller is in, and more importantly 2) the firmware update daemon (fwupd) wants to know the firmware version of the Thunderbolt controller, so that it can check if there are updates available (and if so, show them in GNOME Software). Luckily, newer kernel versions have (on supported platforms) a sysfs interface that can be used to "force-power" the Thunderbolt controller. Both boltd and fwupd have support for that, which is great, but also the root of a race: the force-power interface is not reference counted and also write only (you cannot ask for the current status). Now if boltd force-powers the controller, uevents will be generated which, in turn, will be processed by fwupd and it will try to read the firmware version. If, in the meantime, boltd is done with its thing and powers the controller down again but fwupd is not yet done reading the firmware, then that read will fail. Or the other way around: fwupd powers the controller, boltd gets started due to the uevents, but meanwhile fwupd is powering the controller down again, boltd might e.g. hang reading the boot-acl.

The solution to the problem that Mika, Mario and I came up with was to have only boltd talk to the "force-power" interface and provide a D-Bus API for clients (fwupd) to use. Internally, boltd keeps track of open force-power requests and only when there is none left does the controller get powered down. If you have bolt 0.5 installed, you query the force power status via boltctl power -q or actually request force-powering with boltctl power.

I am currently working on boot acl support (#77), which will be the main feature of bolt 0.6. It is still work in progress, but it is very close to being finished and could use some testing. The code is in the bootacl branch and there is a merge request !119 for potential feedback.