bolt 0.8 with support for IOMMU protection

A new release of bolt is out: 0.8 - I owe it to the MM U!. It contains a big new feature, which is suppport for IOMMU, a new bolt config command and a bolt-mock script to interactively test boltd and components that interact with it. And of course the usual bugfixes and improvements.

I already wrote about the general idea when the Thunderclap paper was published. But to quickly refresh everyone's memory: Thunderbolt, via PCIe, can directly access the main memory (DMA). This opens the door to attacks, the recent Thunderclap attack is a prominent example and demonstration of such an attack. To mitigate DMA attacks, security levels were introduced with Thunderbolt version 3. These new security levels require devices to be authorized before they can be used. On newer hardware and recent kernel versions, another mitigation scheme was introduced that facilitates the input–output memory management unit (IOMMU). The basic idea is to allow direct memory access for Thunderbolt devices only to certain safe memory regions and prevent devices accessing any memory area outside those. The availability of that feature is communicated by the kernel to userspace via the iommu_dma_protection sysfs attribute. If support is active boltd will change its behavior in a few novel ways. This is because we assume that as long as IOMMU protection as enabled, it is safe to authorize devices, even without asking the user. New devices that are not authorized are therefore automatically enrolled, but with a new iommu policy. In the case that IOMMU is turned off again, devices with this iommu policy won't automatically be authorized by boltd and will require explicit user interaction. Additionally, devices that are new but already authorized by the firmware, are now automatically imported, so we always have a record of devices that were attached to the system. Anybody who is interested in even more (technical) details can read bolt issues #128 (iommu) and #137 (auto-import). 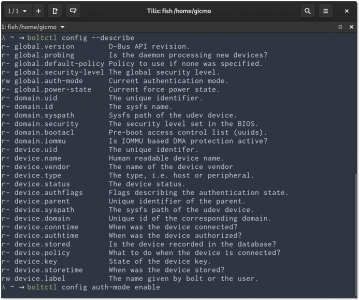 boltctl config can be used to list (--describe), get and set properties.

For example, disabling authorization via boltd can now be done via the boltctl config auth-mode disable. This corresponds to the "Direct Access" setting in GNOME Settings. A list of all available properties can be queried via boltctl config --describe. For more details see also the boltctl(1) man page.

IOMMU support was the last major item on the TODO list. There are a few bigger things that should get into 0.9, the biggest one probably being exit-on-idle (#92)2. I want all features to land in 0.9 and then 1.0 to just be a bug fix release a few month after 0.9. All the remaining features are "nice to have" and not really pressing so I will continue working on them but more on the side. That also means they are all up for grabs if someone else wants to help.